Friends of Carondelet Park nonprofit (FoCP) wants to know, were there really ever bears in the bear pits? Did the Lyle family really flee from unionists in the cloak of darkness and leave everything, including their house behind? What was the true name of the now Boulevard Heights neighborhood? Well, if you joined us this past weekend on the Historical Walking Tour of Carondelet Park with Nini Harris, you are one of the lucky Saint Louisans to know the truth behind some of the most pernicious and fantastical lore in our wonderful city.

Friends of Carondelet Park nonprofit organization teamed up for a 2nd time with local historian Nini Harris, who we first partnered with last month for a Vintage South City Dinner hosted by our lovely neighborhood business, Quincy Street Bistro. Then as now, Nini took us on an exciting and colorful journey about how our landscapes, parks and neighborhoods came to be. Filled to the brim with primary and secondary research, Nini scours the past to bring to light all of the many influences that created our present tense and will continue to shape our future city.

Nini took two groups through the park along with board members of Friends of Carondelet Park to visit the most important and scurrilous landmarks in the park, starting with the original and recreated set of bridges that cover the train tracks on the working side of the park near the YMCA rec plex. The groups travelled on to stop at the Lyle house to admire one of the few remaining and oldest pre-Civil War frame house in the city. And no, the family did not flee the city. Alexander Lyle and his 8 sons most likely helped supply the union army with their lead paint and carpentry business and Alexander died in the home.

Stops along the Picnic Pavilion and past the Boathouse conjured images of 8 men hand digging Boathouse Lake and unskilled WPA workers hired to create jobs during the depression managing to craft the beautiful stone bridges and structures you see lining Horseshoe Lake. Tales of skating on the frozen ice and concessionaries offering boat rides completed the rosy picture of a hard earned past.

Keeping the best for last, Nini drew her curious citizen historians to the place where their imaginations could rest at last, the bear pits. With its high stone walls, ancient and vast street light, sloping basin and peaked limestone ledges, the heart resists the belief that it could have been used for anything as dull as a rock quarry, and perhaps it wasn’t. Were bears chained to those walls? There were those on the trip who had claimed to remember the sight first hand. Nini, tell us, where there really bears in the bear pits, they asked..don’t you wish you were there to find out! 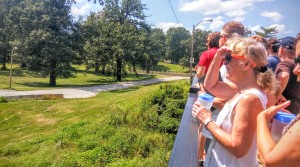 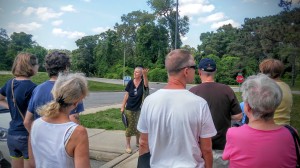 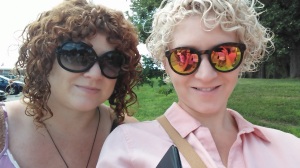 Your donations go towards the beautification and preservation of this regional treasure.